"You Can't Do That": The Beatles and Infringement Issues

Hardware is the Easy Part: The Gray Areas of Integrating VR in Libraries

A Study on Behavior Intention to Adopt Mobile Banking Apps

Thirty Minutes is a Small Price to Pay: Care, Creativity, and Community-building

The Use of ICT in an English Classroom: A Study Into the Attitudes of Young Slovenian Foreign Language Learners

When Online Fact-Checking is a Trap; The Weaponization of Media Literacy

Where's the Value? The Worth of Public Libraries: A Systematic Review of Findings, Methods and Research Gaps

Derived from "chat robot," chatbots are computer software that are programmed to carry on intelligent conversations with people. It can work as a 24/7 helpdesk.

Chatbots are not new. One of the best known and earliest chatbots is ELIZA, which was created in 1964-1966 and emulated a Rogerian psychotherapist.[1] At first the conversational interface was text messages only, but since around 2010, it has evolved to include voice-based assistants (e.g. Siri by Apple on smartphone and Amazon Alexa on smart speakers). The image below shows a brief history of chatbots. 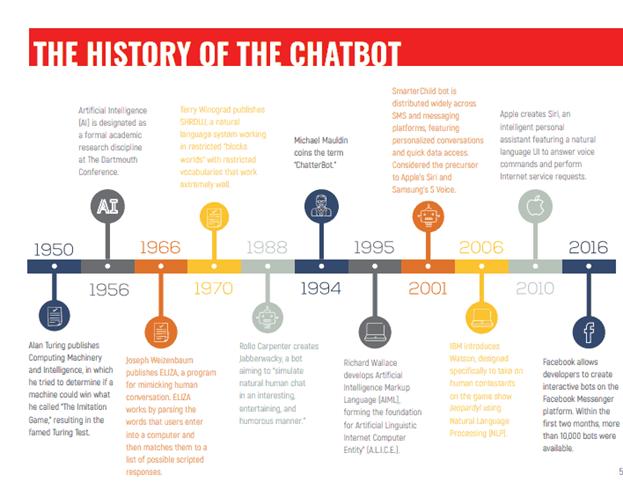 So whatâ€™s the state of chatbots these days? Amazon.com, whose mission is becoming the "Earthâ€™s most customer-centric company" and takes pride in world-class customer service, tested and implemented customer service chatbots in 2020. They tested two kinds of system â€“ one is the more traditional customer-facing chatbot that interacts with the customers on customer service inquiries without human intervention, and the other is a system that helps human customer service agents to respond to customer inquiries more quickly and easily.[2] Their automated agents use neural networks to find answers rather than rule-based system.

Rule-based system has the knowledge representation in the form of explicit and static rules, coded in as if-then-else statements. Human expert knowledge is encoded as rules and embodied within a computer system. It is a very narrow form of artificial intelligence because no learning is involved; it is more a rigid intelligence, or like a human being with fixed knowledge because the knowledge does not change over time. Hence, it becomes an issue when the system encounters a problem for which no rules have been designed; it simply does not have an answer, or even fails to understand the question altogether. Another problem is that in large rule-based systems, it is nearly impossible to add new rules without introducing contradictions. Maintaining these systems can become too costly and time-consuming.

Neural networks, on the other hand, is an example of learning systems. Compared to rule-based systems, this is more akin to adaptive intelligence with its ability to learn: existing knowledge can be changed or discarded, and new knowledge can be acquired. An artificial neural network is based on a collection of artificial neurons, like in a biological brain. Numbers (signals) flow through the connections of artificial neurons with weights (strength of the signal) being adjusted as learning proceeds. Neural networks are trained by processing examples (each example containing a known input and result), which is called supervised learning.

The problem with learning systems is that due to its sheer complexity it is impossible to extract the decision model from the inner workings of a learning system. It is almost a black box. Therefore, humans do not know how the system came to its decisions. Also, depending on what the system has been trained on, algorithmic bias may be introduced, which can be very hard to detect and fix.[3]

Yet, the future lies in learning systems. According to Amazon scientists, the neural network-based chatbot agents significantly outperformed the existing rule-based ones in terms of whether the chatbot successfully completed a chat transaction without referring it to a human representative and whether the customer contacted customer service a second time within 24 hours. (see endnote 2)

According to data from Salesforce, 83% of customers now expect immediate engagement when they contact a company, up from 78% in 2019.[4] Although chatbots are still not as good as human agents, the technology behind it is improving quickly, and it does provide instant gratification when human agents are not available. It can also answer simple questions like library hours, and then summon reference librarians only when more complex conversations are deemed necessary. Places like San Jose State University Library are already using artificial intelligence-based chatbots to service their patrons.[5] Perhaps it is time your library considers one, too.

About the author: Soo-yeon Hwang is the Web Services Librarian and Assistant Professor at Sam Houston State University. She has a PhD in Communication and Information from Rutgers University, and MS in Information from the University of Michigan, Ann Arbor. She has professional experience in software development, technical writing, testing, and technical support.

[1] See it in action at https://web.njit.edu/~ronkowit/eliza.html