Meditations on Library Leadership for the Post-Pandemic Era

Options to Back Up Your Photos to the Cloud

Spreadsheets for Librarians: Getting Results with Excel and Google Sheets

Discovering the Past Through Newspapers: Newspapers.com and NewspaperArchive.com

E-Government in the Republic of Croatia: Current State and Challenges

How Transformational Leadership Influences the Knowledge-Sharing Process: Mediating the Role of Trust

Neutrality in Public Libraries: How Are We Defining One of Our Core Values?

Old Questions, New Circumstances: Some Reflections on Information During the COVID-19 Pandemic

Publishing is Evolving, But Are We? Developing Talent for the Future

The Stages of Revising a Dissertation into a Book

Who Owns and Cares About the Data? A Method for Identifying and Gathering Information for Business Research Investigations

An Intellectual Commons at the Heart of the Campus 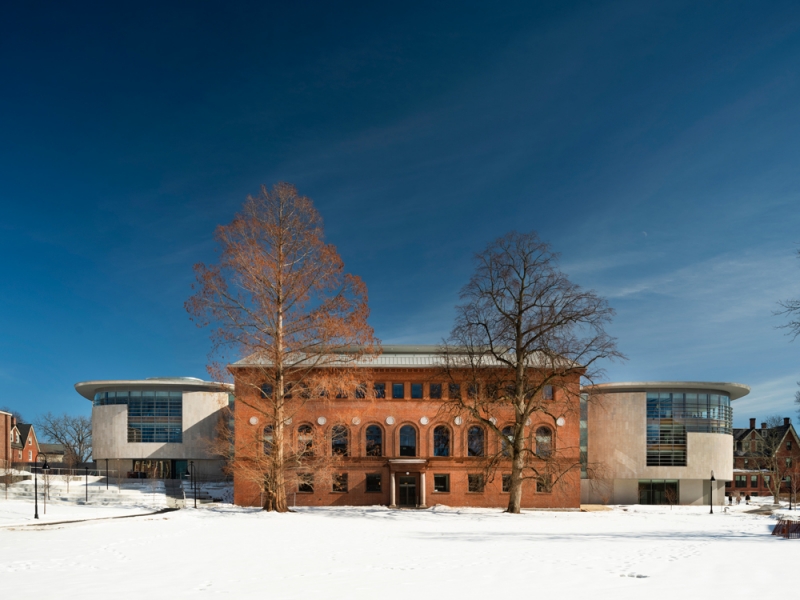 Nine years ago, when Smith College set out to re-imagine Neilson Library, the college envisioned, in the words of President Kathleen McCartney, a "modern library that is not only functional but forward-looking—a library that will showcase our collections and enrich our community in ways we can only begin to imagine."

Now, as the redesigned library opens to members of the on-campus community, the new Neilson offers, McCartney says, "a reenvisioning of a building that has been at the heart not just of our campus but also of the educational experiences of generations of students, staff and faculty.

"This state-of-the-art library houses the new and the old: our archives and special collections, digital design studios, the Jill Ker Conway Center for Innovation and Entrepreneurship, and so much more," McCartney said. "It is a place of learning, connection, discovery and beauty—a place that invites us to explore the world in all its wonder."

With an emphasis on natural light, sustainable environmental design principles, and flexible interior space that can be used for a variety of purposes, Lin’s design re-imagines the library as a space for collaboration and reflection. It also reconnects the college’s science quadrangle with the campus’ historic center, restoring integrity to Frederick Law Olmsted’s 1893 campus plan.

Maya Lin Studio developed the design in partnership with colleague William Bialosky and the firm of Shepley Bulfinch. Landscape architecture is by Lin with landscape designer Edwina von Gal (in collaboration with Ryan Associates).

Begun in 2018, the five-story, 153,865 gross-square-foot project is Lin’s first college library and one of the most significant capital projects in Smith College’s history.

In an artist’s statement, Lin says she envisioned the new Neilson as "a dialogue between old and new."

"By preserving the original, historic Neilson foundations and exterior, the new library retains the memory of the original structure. But completely rethinking and reconstructing the interior speaks to the needs of students today—with more room for collaborating and socializing. And of course the book is still central to the space," Lin says. "When you’re in Neilson, you’ll know that you are in a house of books."

The new Neilson retains the original 1909 structure, including the venerable Neilson Browsing Room, but replaces the 1962 and 1982 additions with "jewel box" wings—constructed of masonry, wood and glass—that offer open, inviting, light-filled spaces designed to support research, teaching and learning in a variety of styles. Featuring gracious entryways on each side of the building, the new library draws people in from every direction.

Inside, books are abundant and visible. Visitors will also notice that all five floors are connected by an eye-catching central "oculus," an open core designed to capture and disseminate ethereal light throughout the space.

Two curved, "jewel box" wings (recently named for Smith presidents emeritae Ruth Simmons and Mary Maples Dunn) create comfortable space for reading (in the South wing) and socializing (in the North Wing). These striking, curved additions to the building’s original 1909 core replace outmoded wings that divided the heart of Smith’s campus, uniting Smith’s historic quadrangle with its science quadrangle. "The two curved, organically shaped jewel boxes are a contrast to the original, orthogonal design, and speak to my aesthetic, which introduces a more hand drawn and organic shape," says Lin.

The primary purpose of Smith’s library redesign was not to expand space for existing collections, which are among the strongest of any liberal arts college, but to think creatively and intentionally about what a forward-looking library should be, how it should function, and what scholarly and social goals it might serve.

In particular, Smith sought to develop a library that reflects and conveys the nature of a Smith education, which is global in scope and based on learning across disciplines.

The project cost for the new Neilson Library was $120 million, of which $42.8 million has been funded through philanthropy. Reflecting the purpose of a contemporary library

The new Neilson places a premium on flexible space that blends traditional collections with new technologies and an intentional focus on collaborative learning.

A "learning hub" for the campus—offering classrooms, quiet study and reading rooms, as well as expanded space for collaboration, socializing and high-tech work—the new Neilson features a Digital Media Hub with multimedia equipment and studio space for recording digital content; GIS and gaming labs; and a large, multifunctional Learning Commons where students can work with research librarians, instructional technologists and writing and quantitative learning specialists.

The Jill Ker Conway Innovation and Entrepreneurship Center, named for Smith’s first woman president, is housed in a prominent place within the central core of the library, just to the left of the entrance from Seelye Lawn. Across from the Conway Center, the Neilson Browsing Room—a longstanding and beloved home for readings, lectures and other events—has been restored and updated.

Provost and dean of the faculty Michael Thurston says, "What’s especially exciting to me is the way the shape and flow of spaces emphasize collaborative inquiry. It really emblematizes and enacts the ancient and vital identity of a library as the place where a community of scholars engages both the preserved thought of the past and the ongoing conversation that looks to renew and enrich our understanding."

The new Neilson is intentionally designed as one of the greenest, most energy-efficient libraries in the U.S., using 50 percent less energy than a typical library and contributing significantly to the college’s goal of reaching carbon neutrality by 2030. Maximizing the use of natural light through the central, light-catching "oculus" and expansive windows (laced with an ultraviolet webbing pattern that prevents bird collisions), Smith’s new Neilson Library unites the indoors and outdoors with an exterior courtyard and an outdoor amphitheater that can be used for performances and classroom instruction. Throughout, the structure emphasizes the use of locally sourced materials, including limestone.

Lin said, "My approach was to create a new, state-of-the-art, sustainable building that creates a dialogue with the historic Neilson and opens up and restores the Olmsted master plan, expanding the possibilities of the library while reducing the overall footprint of the building and restoring the heart of the campus."

History of the project

Smith’s library redesign began in 2010, when the college engaged Shepley Bulfinch to partner on a master plan for all of the college’s libraries. Soon after, the college worked with Shepley Bulfinch on several studies to assess what could feasibly be accomplished with current library space. In 2014, the trustees approved the concept of a redesign of Neilson and the hiring of an architect.

Maya Lin and Shepley Bulfinch were hired in April 2015. They approached the Smith library redesign as a creative exploration and an active partnership with members of the Smith community. During the process, nearly 1,900 students, faculty, staff, alums and members of the Northampton community participated in more than 30 "engagement sessions" designed to help re-imagine Neilson for the 21st century.

The library’s interior design reflects priorities identified during those sessions, including:

Built in 1909 and expanded in 1962 and in 1982, Neilson Library holds pride of place on the Smith College campus, sitting between the science quad and the arts and humanities quad.

Working within Frederick Law Olmsted’s 1939 plan for the Smith campus, Lin’s design for the new Neilson eliminates the architectural barrier created by the previous building, unifying the campus and opening the view—and the paths for travel—from the Smith College Museum of Art to the science quad, and from Green Street to Chapin Lawn.

The new Neilson highlights significant improvements to the surrounding landscape, recalling Olmsted’s original campus plan, which Lin describes as "not formal, but very organic. Our goal," Lin says, "was to restore the heart of the Smith Campus—creating a landscape that welcomes you to sit, read and gather outside as well as bringing back the flow around the building."

The revised landscaping effectively reveals and incorporates the 16-foot elevation change between Neilson’s east and west sides, and will also preserve several heritage trees that surround the original 1909 structure.